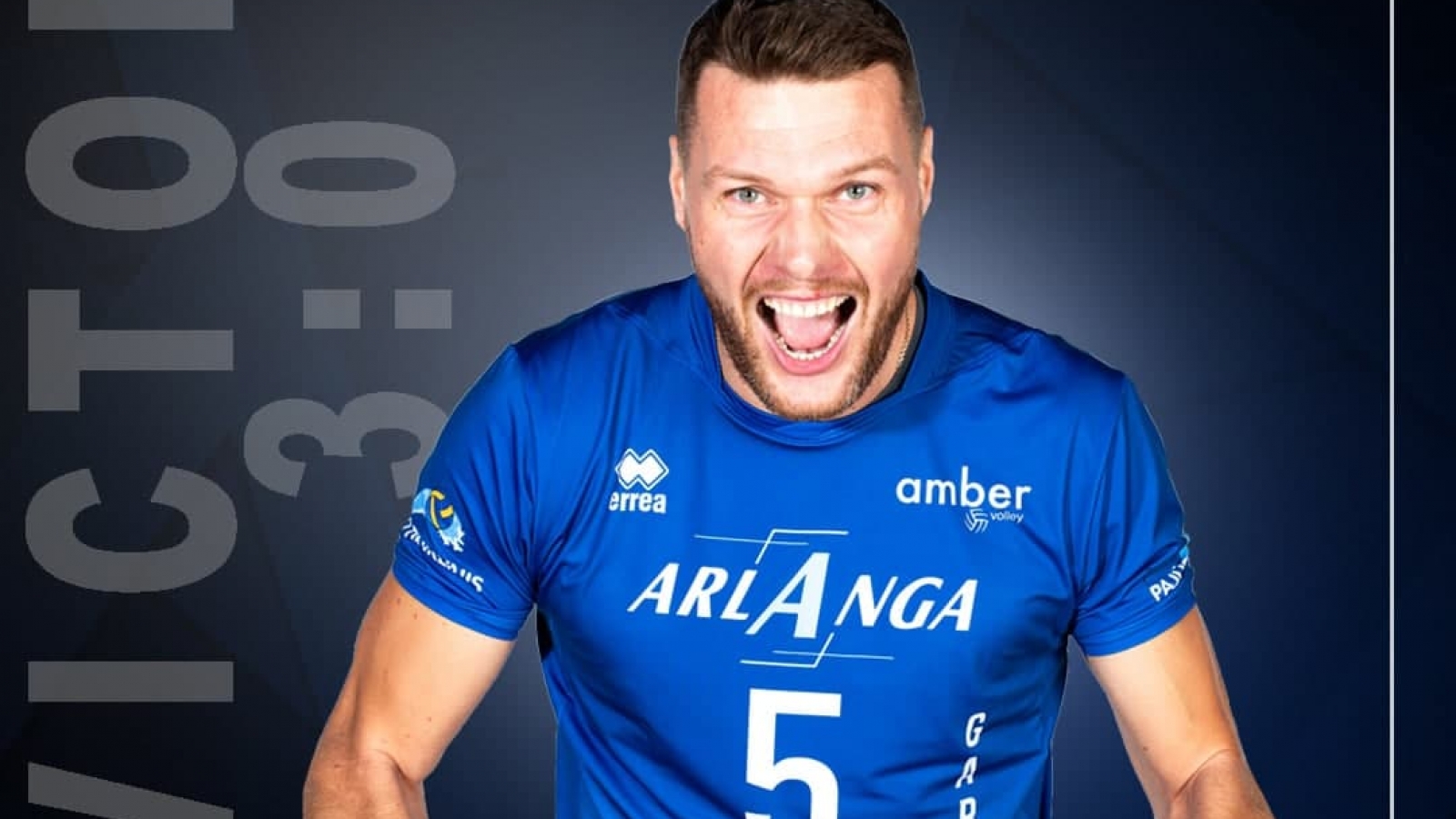 Thank you for agreeing to answer some questions for our website.

1.I will begin with congratulation. On December 18 together with your new team “Amber Volley” you won the Lithuanian Grand Cup, which is, as I understand, an analog of our National Cup?

Tell us in a few words what kind of competition it is, how it is structured, your first impressions.

Thanks for the congratulation. Yes, it really is an analog to our National Cup. We started participating right from the quarterfinals. They consisted (quarterfinals) of one game, the next weekend we played the semifinals, it was one game as well, and a week later there was the finale.

Impressions were only positive, emotions were overflowing.

2. You are spending this season in Lithuania, in the “Amber Volley” club from Klaipeda. How did this option come about, what are your impressions of the new club, new country?

This option came up quite unexpectedly for me, in the summer my agent offered a contract with this club, together we negotiated the terms and I agreed. The club is quite new but has already proved itself well in Lithuania and the Baltic League. There is a good, professional approach to the training process here. The city itself is beautiful, interesting, with beautiful nature all around. I really enjoy it here; I also like the country as a whole.

3. Apart from the Grand Cup that your team has just won, which tournaments do you still take part in, what aims does the club’s management set for the season?

The main tournament we are aiming for is probably the Baltic League, in which teams from Latvia and Estonia participate as well. The goal here is to at least get into the top four teams. Also, after the New Year, we are joining the country’s national championship, in which we are focused only on the first place.

4. You are quite an experienced player, you have already played in Ukraine, Russia, Belarus, Kazakhstan. But you can say that Lithuania is your first “legionary” experience in the European Union. What are your impressions of the organization of the competition, infrastructure, attitude to the club by sponsors, local authorities?

Yes, indeed, this is my first experience in the European Union, which is quite interesting. I will say that basketball in Lithuania is certainly more popular than volleyball, but thanks to our club president, we have many supporters among sponsors and local authorities who keep their promises and help the team. Matches are organized at a high level, there is always an online broadcast, the sports halls are good, clean, warm, there are enough fans.

5. Apart from you, there are 2 other Ukrainian players on the team: the setter Dmytro Shlomin and the outside hitter Andrii Chmirov. Usually, the “legionnaires” have higher requirements, they have to “get results”. How is it in your team, do you feel psychological pressure or are the requirements for all players the same?

Yes, of course, the requirements for “legionnaires” are higher everywhere, everyone understands this and first and foremost we understand it ourselves, so we try to give our best on practice and in every match. But to say that there is some psychological pressure on us…, I would not say so, even the opposite, sometimes we are given more time to rest before important games than young local players.

6. Outside the court, after practice and matches, does the “Ukrainian Diaspora” spend some time together, or do you switch on to other interests a bit? In general, how do you spend your free time in Lithuania, do you visit some interesting places, or go to cafes, cinemas?

Andrii lives in the same house as me but in another part of it, so we see each other often in our free time. I see Dmytro less because he lives on the other side of town and spends more time with his family.

In general, my wife and I try spending more of our free time traveling around the historical sights of the city and its surroundings to learn more and see something interesting from the history of this region.

7. As far as I know, the coach of your club, Austris Stals, worked at the headquarters of the Latvian national team as an assistant of the head coach at this year’s European Championship. The Latvians were quite successful in the Championship, passing from their group to play-off and thus entering the TOP-16 European teams. How is it to work with the coach? Maybe you learned something new, interesting in the training process? What is the difference between working with Ukrainian coaches and a “European”?

I like the coach very much, I immediately feel a fresh, modern, European look at volleyball and the training process. There is something new that I learned from him, especially when it comes to working with statistics and analysis of the opposing team. In general, I try to “write” everything in my head, maybe I will start to train myself someday. Regarding the difference between working with Ukrainian coaches and Europeans, I will say this: it is a pity that at the moment there are very few creative, modern professionals in Ukraine who would like and be able to learn modern volleyball and develop as coaches. That is why foreign specialists are being invited to Ukraine now. And their main distinguishing feature from most of our specialists is restraint, credibility, and a modern view of volleyball and the training process.

8. I understand that you must be a bit tired of this topic and we all would like to return to “normal” life as soon as possible, but it is still difficult to avoid it. What about the restrictions on Covid-19 in the country, are spectators allowed at your matches? How does the club’s management cope with this situation?

The situation is that a “passport of opportunity” has been introduced in Lithuania. It is a QR code that indicates that a person has either recovered from COVID, has antibodies, or has been vaccinated. And this “passport” allows you to go to shopping malls, large supermarkets, and mass events, but of course with a mask. That’s why everyone who has this “passport” and a ticket is allowed to be at volleyball matches. The majority of the Lithuanian population has such “passports”, so there are no serious restrictions.

9. Now you are having a traditional two-week Christmas break in the competition. How do you plan to spend these few weeks?

We plan to be here with my wife, to see how Christmas is celebrated in this region, to visit the nearby cities, so mostly to use the time to be more acquainted with the country.

10. There is enough information about your professional-level performances on volleyball sources. But I would like to ask you about how you got into volleyball and who were your first coaches. Quite often we know and recognize the coaches of national teams, clubs of the highest professional leagues, but we forget about those who lay the foundation for future success, teach the basics of technique, tactics, strengthen our character. We are talking about children’s coaches.

Can you tell us a little bit about starting your career?

My experience with volleyball began in the eighth grade. I was already almost the tallest in my school at that time and the volleyball coach of the children’s sports school Sorokin Gennady Mikhailovich couldn’t help but notice it. He invited me to come to the practice. There I began to take my first volleyball steps. And after the end of the eighth grade, I was already invited to the children’s team at the volleyball club “Krymsoda” which was in Crimea, in Krasnoperekopsk. And there I had spent my next 10 years, going from a beginner to the awarding of the Ukrainian Super League. In Crimea, my first coaches were Gulyaev Serhiy Andriyovych and Vovk Viktor Pavlovych, and in the adult team we were trained by Skrypka Serhiy Mykolayovych.

11. Do you have time to follow Ukrainian volleyball life? What are your impressions of this year’s championship, cup?

Yes, of course, I follow the Ukrainian volleyball life, at least its main events. This year’s championship promises to be very interesting and full of surprises, which the Ukrainian Super Cup has already shown us.

12. At the end of our conversation I wanted to ask about plans for the future. Aren’t you tired of volleyball, do you still have ambitions, “drive” to play at a good level? Are there any thoughts about the future after volleyball or not yet?

No, I’m probably not tired yet. I would still like to play at a good level. Although I understand that it will soon be necessary to change the line of work, I have not yet decided what to change to. Maybe I would like to try coaching myself, share my experience with others, change something, add modern ideas, update or even improve. In general, there is a desire to work on Ukrainian volleyball!

Thanks for the candid answers.

When copying text or part of it, a reference to the source is required.