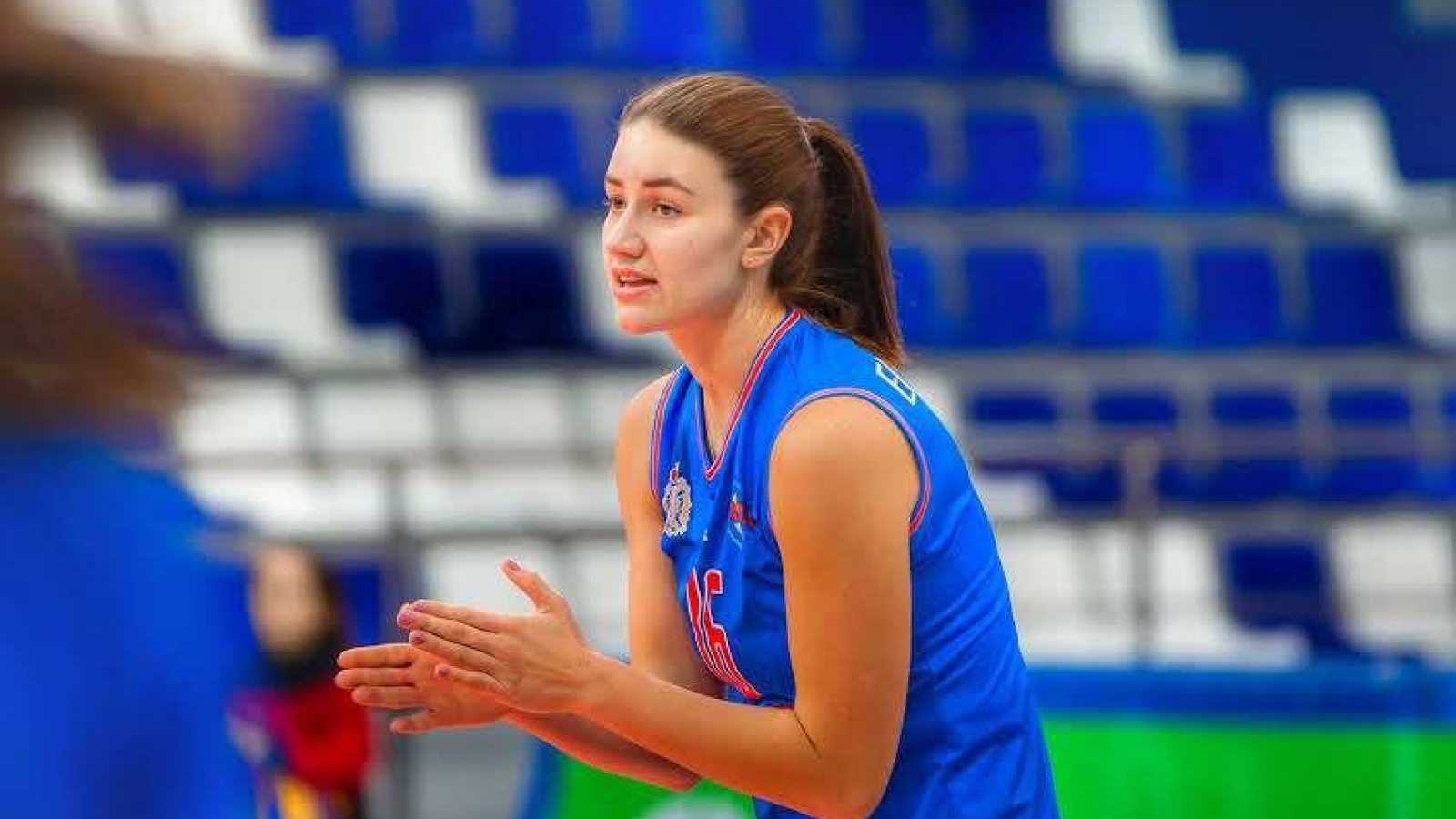 I started playing volleyball in Nizhny Novgorod when I was 7. My Dad brought me to volleyball classes. Incidentally, my sports school was very far from where we lived and I had to travel a long way for training. Later on, we moved closer to the sports school, so that my sports classes and school were within a walking distance.

My first coach was Miroshnichenko Alevtina Fedorovna, she continues to coach children up to now. We had a strong junior team and we used to win first and third plases in the Russian Championship in our age category. I still keep in touch with my first coach. Prior to volleyball, I used to do rhythmic gymnastics for a brief while.

2.How did the opportunity of VC ‘Dukla’ (Liberec) arise? Did you know anything about the club and the Czech volleyball championship before? Did you turn for advice to anyone before you have signed the contract?

The opportunity with ‘Dukla’ (Liberec) popped up unexpectedly. I had already signed a contract with one Russian team, but at some point they found themselves in an uncertain financial situation and informed me that they wouldn’t mind it if I found another team. At this point, I got an offer from ‘Dukla’, which I accepted. I didn’t go into the details of the negotiation with the club. My agent  Sergei Makarov and the Slovak sport agency ‘Aragones’ took care of everything. In the end, the contract conditions were totally fine by me. To be honest, I didn’t know much about the Czech championship and I didn’t know anyone from my friends who played in the Czech teams. So I didn’t really have anyone to discuss it with. However, a lot of players who play in Europe are very happy with the conditions and the level of the championships.

3. As far I know, your arrival in the Czech Republic and the entire story with the work visa application was not an easy one. How did you handle that process? Did you have any doubts about your decision to sign a contract with a Czech club?

It’s true – the visa processing took me ages and I was not able to arrive in the Czech Republic on time for the training, not even for the beginning of the championship. But it’s only because of the difficult situation with the pandemic. I was a bit worried that if something went wrong, I would have to look for another club, and it was already the end of the summer, so basically all the teams had already been formed and already started their training. I didn’t have any doubts, I only wished that everything would resolve soon so that I could join my team.

4. How did the club welcome you? How are you currently adapting to the new country and the new team? Do you feel any language barrier or a mental barrier during the training or everyday life?

I was welcomed amazingly well. It was a bit difficult at first since I was not able to participate in quality training in Nizhny Novgorod. Here, the girls had already started training. I had to catch up with them. What is more, here in the Czech Republic, we use Gala balls and before I would only play with Mikasa balls. So it took me some time to adjust. I understand some words because they are very similar to the Russian ones. Besides, the second coach and one girl in the team speak Russian. As to everyday life, I didn’t run into any difficulties.

I can’t say it was a difficult decision. It’s just that before I played in two teams, 4 seasons with each team, and I played in my native city during the

last 4 seasons. After such a while I learned our ways well, I learned the coach and the players. By contrast, here everything is new for me. But it’s fascinating.  My family were positive and supportive. If it hadn’t been for the pandemics, there wouldn’t be any problems at all, since it’s just a 3 hour flight from Moscow to Prague. A lot of Russian clubs are located further from my city than Liberec in the Czech Republic.

6. VC ‘Dukla’ (Liberec) has a rich history and traditions in the Czech Republic. The teams didn’t play all the games in last season due to the Covid-19 pandemics, but the places in the Europian Cups were distributed according to the team scores at the moment when the championship was stopped. Unfortunately, your club didn’t make it to the Europian Cups this season. What goals does your team management set for this season, which is complicated by the quarantine and restrictions?

I believe the goals of the club are definitely to make it back to the Europian Cups and finished on the highest place in the Championship. In the Czech Cup, the minimum goal is to play in the final. The most important thing is to hold the Championship without interruptions since it’s quite difficult to go without training and plays.

7. As a foreing player in the team, you are seen as one of the team leaders. Do you feel the pressure of such responsibility?

No, you only have to play well and everything will be alright.

8. How many official games for the club did you take part in before the championship stopped due to the quarantine restrictions? Did you manage to form an opinion about the level of the Czech volleyball? Can we compare the Russian and the Czech championships? How do you like the training process in the club?

I’ve only played once. The play took part in a few days after my arrival. Unfortunately, I didn’t have a chance to form an option yet. I can’t compare with the Russian championship either, since I didn’t get to see other Czech teams. So I will only be able to answer these questions towards the end of the season.

9. The town of Liberec is located in the west of the Czech Republic, close to the German and Polish borders. At the same time, the capital city of Prague is not far either (115 km). During almost two months in the Czech Republic, did you have a chance to travel and see the sights?

I have only managed to explore Liberec a bit and visit the Ještěd mountain. I would of course love to see Prague, so I am looking forward to the end of the quarantine to travel there. As to Germany and Poland – in the light of the current situation, I’m not sure when I will be able to make it there. I hope that once the pandemic eases up, I will have a chance to visit those countries too.

10. The system of VC ‘Dukla’ includes both male and female volleyball teams. Did you manage to meet anyone or make friends with the fellow team members?

I was only able to see one play of the male team. I didn’t have a chance to make friends with anyone. As of now due to the restrictions, I didn’t manage to get to know any of the girls from my team better.

11. The last question: what are your personal goals for the next 2-3 seasons? What perspectives for the nearest future do you see?

The goals… Whatever clubs I play for, my goal is to do my best to win the top place in the Championship, bring victories to the fans and improve my volleyball skills.  I haven’t thought about the next seasons yet. I hope this season will go smoothly, without cancelled plays and quarantines.

I hope this uncertain time will end soon! I hope all sportsmen will resume their regular training and competition process, and that they will be able to play without any restrictions, and the fans will return to the tribunes and will support their favourite teams!

Thank you for your answers.
Stay healthy and the best of luck in your plays for ‘Dukla’!